The First Church Peace Pole proclaims, “May Peace Prevail on Earth” in 12 languages. The languages are English, Spanish, French, German, Russian, Chinese, Japanese, Hebrew, Arabic, Hindi, Swahili, and Abenaki (which is the language of the Native Americans indigenous to this area). There is also a small plaque on the pole that reads, “Dedicated to the World’s Peacemakers. First Congregational Church. 2013.”

The first Peace Pole was planted in Japan in 1955 by Masahisa Goi, who decided to dedicate his life to spreading the message May Peace Prevail on Earth in response to the bombings on Hiroshima and Nagasaki. Mr. Goi believed that peace begins in the heart and mind of each individual, and that we all share a common responsibility for the future of our planet. He started this Peace Pole movement as a way of uniting the hearts of humanity, transcending all boundaries of race, religion, nation, and politics. Over 200,000 Peace Poles are planted around the world in over 200 countries.

This First Church Peace Pole makes us part of a global community of all faiths and nationalities working to make a better, more peaceful world. Our Peace Pole represents our prayer for the future: a future which sees our world becoming a safer and more compassionate place. Dedicated on Mother’s Day 2013, we long to see our children’s future free from violent conflict. 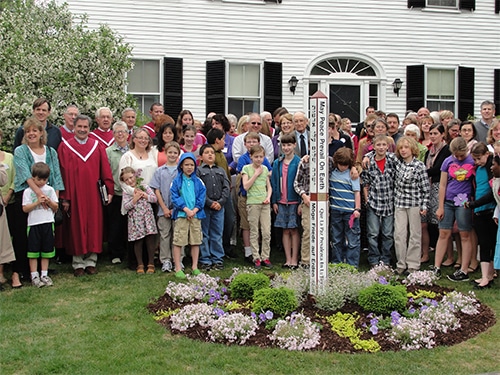